In Atipika Barcelona, we are passionate about design in general, so from the 26th to the 30th of June, we will be paying close attention to 080 Barcelona Fashion, which will be celebrating its 20th edition. New collections and brands will vindicate once more the importance of the fashion industry in the Catalan capital.

This ‘Barcelona Fashion Week’ was born in 2007 – it is celebrated twice a year – to give visibility and promote independent designers and to reactivate the textile industry. Its runway is a great opportunity for many designers, which can commercialize and present their collections for anyone to see.

The catwalk will be installed on ‘Recinto Modernista de Sant Pau’, and this year’s novelty will be the ‘080 Barcelona Fashion Nights’ – activities, concerts and talks will take place after the fashion shows.

In this edition we will find renowned brands and designers, such as Guillermina Baeza, Custo Barcelona or Lola Casademunt, as well as emerging designers. Among the activities and fashion shows there are some which stand out – the show ‘The Last Exit’ by Macson because of their 75 anniversary; the debut of the choreographer, dancer and model Rafael Amargo as designer with its collection “Eclèctic”; Custo Barcleona with its collection “Light Years Cruise”; and the 080 Barcelona Fashion Anniversary Party by Zalando. 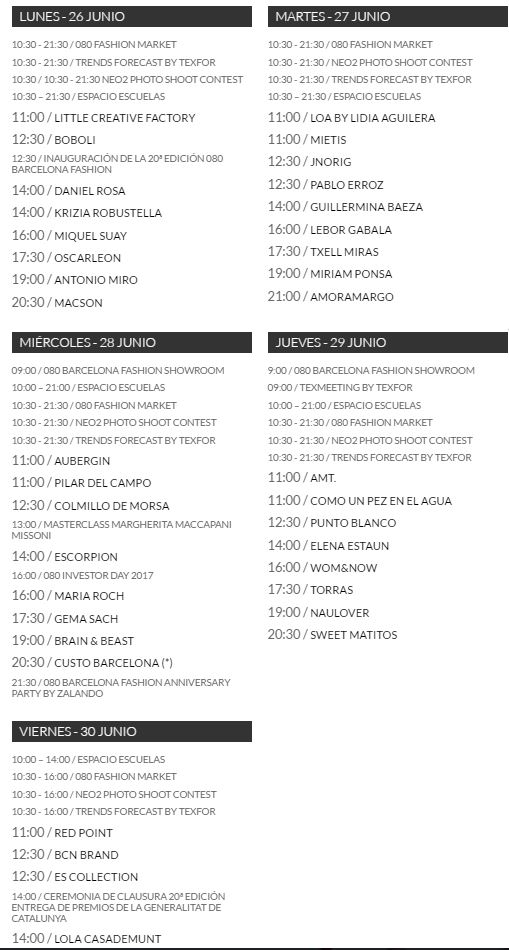 If you cannot make it to the 080 Barcelona Fasion, you will be able to follow every show and activities from their online TV channel, 080 TV Channel, on their website, and keep up with every piece of news and event on their social networks.

For more information, you can visit their official website, where you can find all the information about the 20th edition of the Catalan Fashion week.