The festival of La Mercè is one of the unavoidable events for all the people in Barcelona. It is the great popular festival of Barcelona, a proposal that seeks to be a mirror of the city: a metropolis that advances, that proposes, restless and curious. An event that keeps its traditions and customs, while innovating and modernizing, driving its unstoppable evolution. La Mercè holds many public spaces in Barcelona and it offers a program focused on the Mediterranean culture that every year brings together more than two million people to enjoy its many and varied cultural, playful and artistic activities.

The origins of the Mercè date back to the papacy of Pius IX, at which time the Supreme Pontiff declared the Virgin of the Mercy as patron of the city and thus, Barcelona began to celebrate its festivities in September. The celebration lived moments of fullness and decline in the last third of the nineteenth century. La Mercè became more important in 1902, when, promoted by Francesc Cambó, a major party was held and that would become a model of those currently produced throughout Catalonia. A party that aims to show the city’s folk and cultural diversity, such as dances of ‘diables’, ‘gegants’, ‘castellers’, ‘sardanes’, etc. However, there were constant clashes between those who were in favor of a religious and conservative party and those who defended a secular party. The calm came with democracy, when La Mercè reached its character as an authentic popular festival, thanks to collaborations by the entire city. 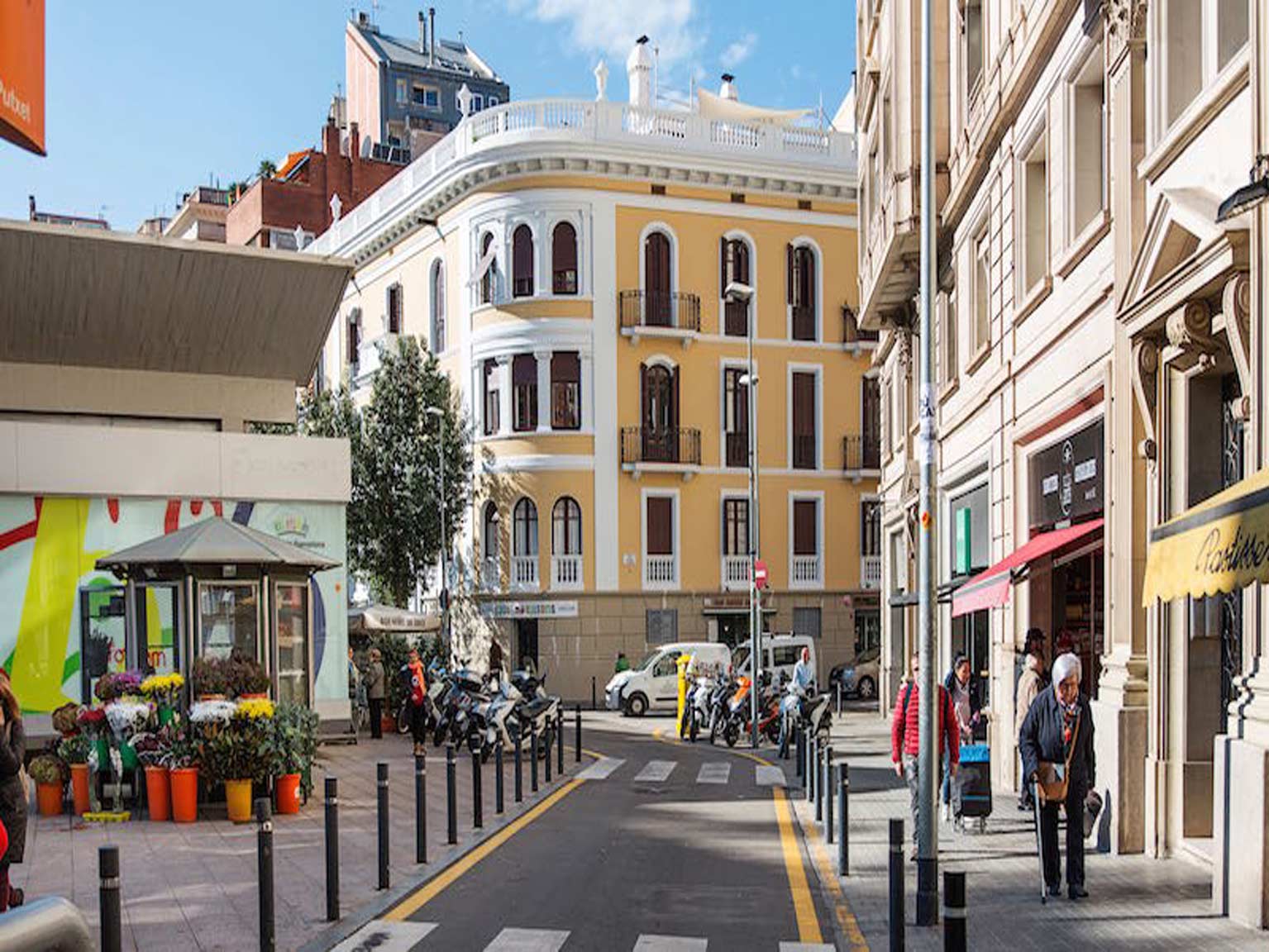 La Mercè is the patron saint of Barcelona and, as all others, it has a mythological origin. It is said that on the night of September 24, 1218, the Virgin appeared simultaneously to King Jaime I, to San Pedro Nolasco and to San Ramón de Penyafort. Being times of religious war, the three asked them to create a religious order intended to rescue Christian prisoners from the Saracens. That year the order of The Mercy was founded. In 1687, the city of Barcelona suffered a plague of lobsters that foretold to seriously harm the city and its crops. On September 25, the convent of The Mercy caught fire and the people believed it was an omen, so much so that all the citizens and the Council promised to appoint the Virgin of the Mercy patron of the city if she freed the lobster population. The wish was fulfilled, and the lobsters left the city, turning this virgin into the patron of Barcelona, a title that Saint Eulalie had once held alone.

It is customary that during La Mercè it rains in Barcelona. According to popular legends, the origin of these rains is caused by Saint Eulalie, the former patron saint of the city, who cries from the sky with rage to boycott the festivities of the Virgin of the Mercy, her rival. It is important to mention that Barcelona has two patrons, Saint Eulalie and the Virgin of the Mercy, who celebrate their onomastics on February 12 and September 24 respectively. 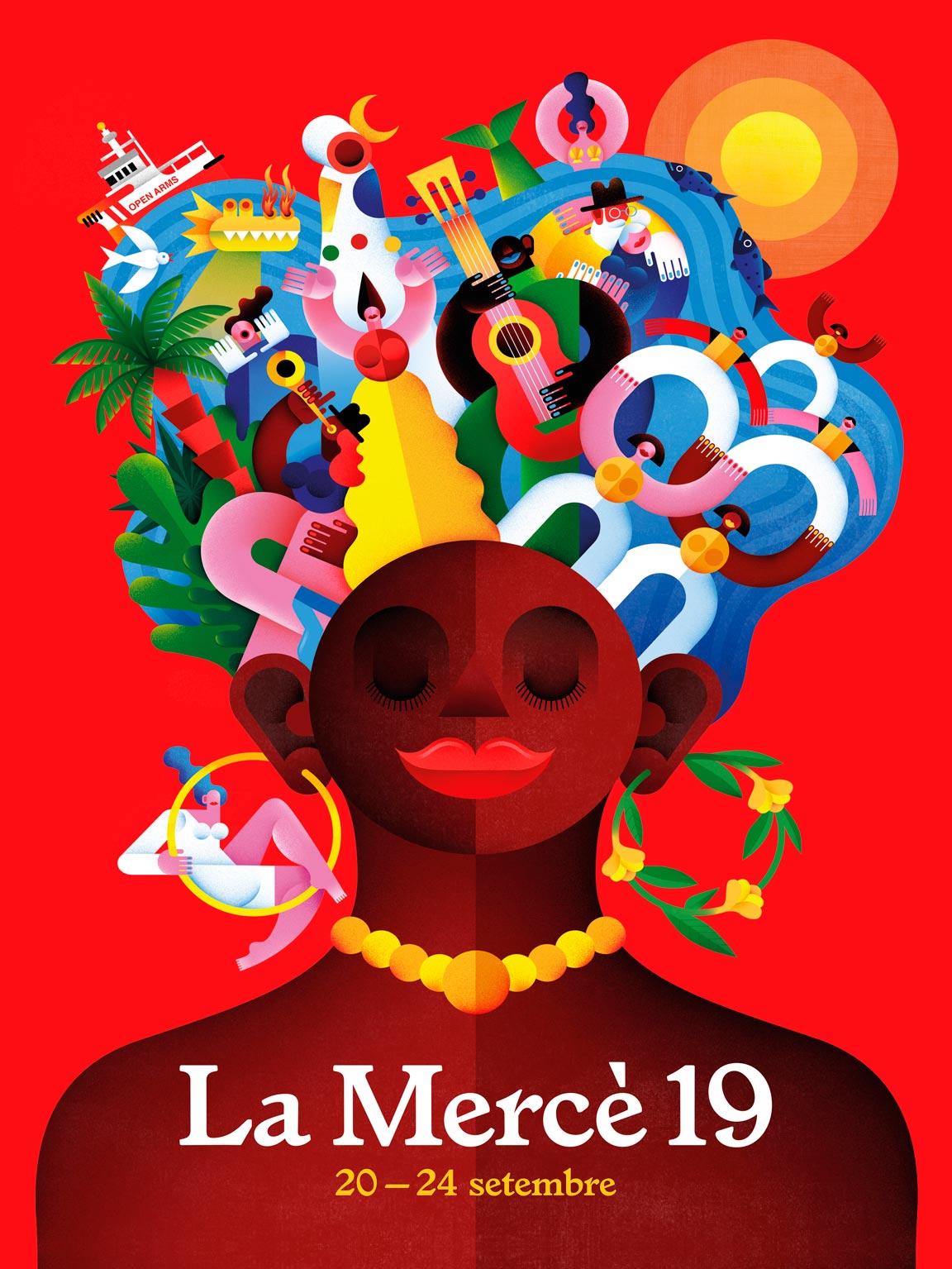 La Mercè is committed to an artistic program that highlights dance, circus, charangas, concerts and itinerant shows. To this are added an infinite number of large-scale nighttime performances, forming a great stage full of illusion and fantasy. The city of Barcelona, with this important popular impact, has established itself as a true meeting point for the best national and international artists. It links past, present and future and never fails to renew itself or remain expectant and open to the world, incorporating, through its citizens, the elements that shape its identity and tradition.

Among the main shows of La Mercè, we find the ‘toc d’inici’, ‘els gegants’, ‘castellers’, ‘sardanes’, ‘esbarts’, ‘correfocs’, ‘bastoners’, ‘grallers’, ‘trabucaires’ and many others. However, this party incorporates contests, exhibitions and countless concerts as well. The musical program of the festival is maintained thanks to three main proposals: The Festival [BAM], Mercè Música and Cultura Viva. The Festival [BAM] is an independent music event that covers more than sixty proposals in a dozen stages. Mercè Música encompasses a wide variety of artists known throughout the country; This year’s proposal has such well-known music bands as La Casa Azul, Dorian, La Pegatina and many others. 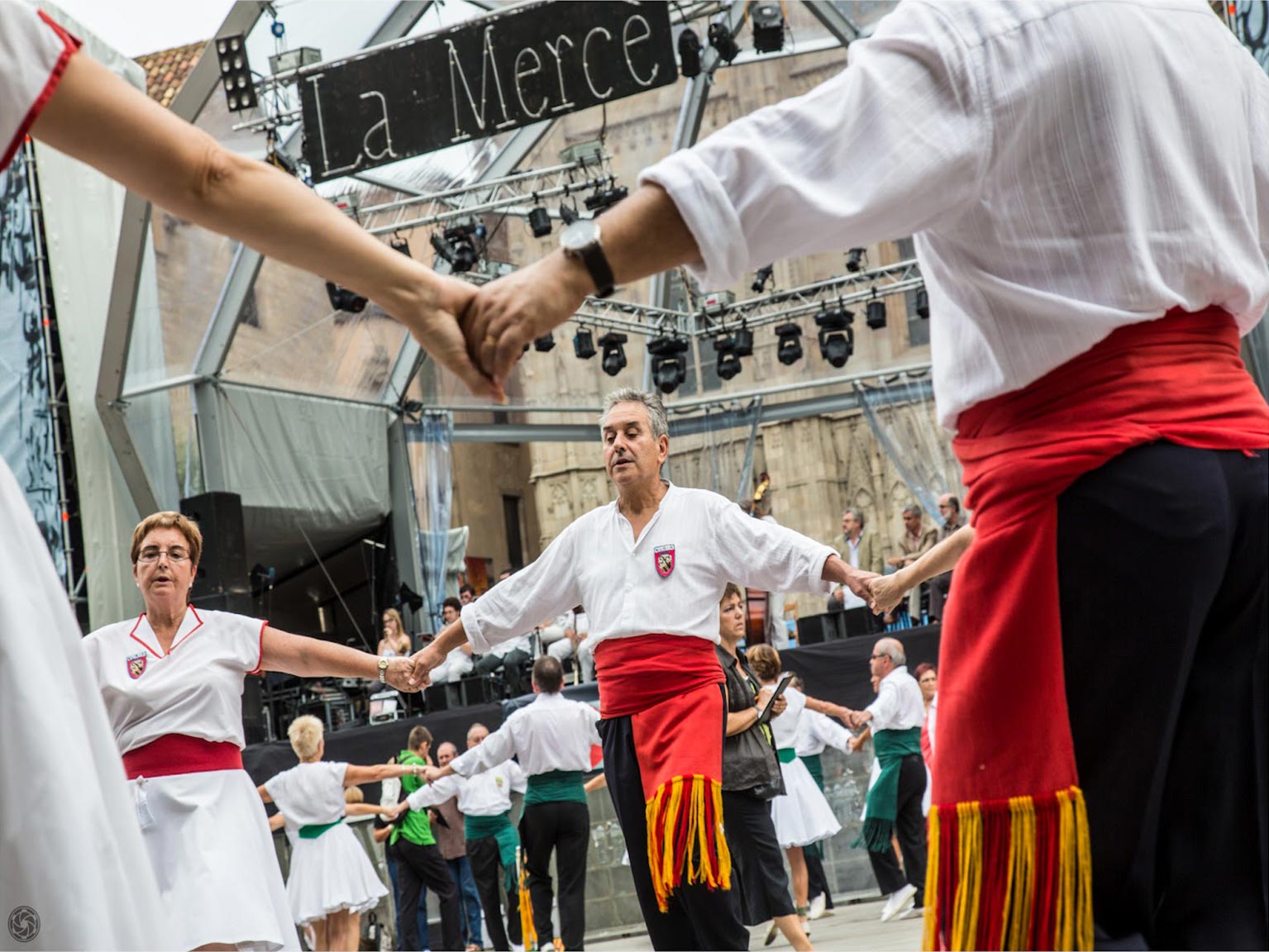 If you are thinking of living La Mercè as a true Barcelona citizen, we will present you a small selection of the most emblematic and famous activities of these parties. Before the night party, during the day, it is essential to discover the popular festivals that are organized under the name ‘Arts de Carrer’: circus, music on the move, family theater, ‘gegants’, ‘sardanes’, ‘castellers’ and many others. These shows are usually organized in ‘La Rambla’, ‘Plaça Sant Jaume’ and the Cathedral. The little ones are also invited to these parties. The city organizes an infinity of theater, storytelling, painting and sports workshops, most of them in ‘El Parc de la Ciutadella’. In addition, some museums in Barcelona schedule open days completely for free, including CaixaFòrum, CCCB, CosmoCaixa, Fundació Antoni Tàpies, MACBA or MNAC. You can check the schedules by clicking on the link: https://www.timeout.es/barcelona/es/que-hacer/la-merce-puertas-abiertas.

When it gets dark, the lights appear. Mapping is a proposal that has triumphed in the last years of the festival. At dinner time, the most important facades of the city, such as the town hall or the Hospital de Sant Pau, are illuminated in an impressive light show. After this function, music and dance arrives. The offer of concerts and live music is endless, and it extends from ‘Plaça Espanya’, ‘Plaça Catalunya’ and ‘Plaça Reial’ to ‘Parc del Fòrum’, passing through ‘Plaça dels Àngels’, ‘Plaça del Rei’, ‘Arc de Triomf’ or ‘L’Antiga Fàbrica Damm’.

The festival ends with the fantastic ‘Piromusical’ in the ‘Font Màtica de Montjuïc’, a show that paints the sky of light, while the explosions of fire palms are combined with thematic musical blocks that review the most important events of the year. An exhibition of fireworks, moving water and music that brings together thousands of people every year to celebrate a closing ceremony at the height of the wonderful festival that is La Mercè. 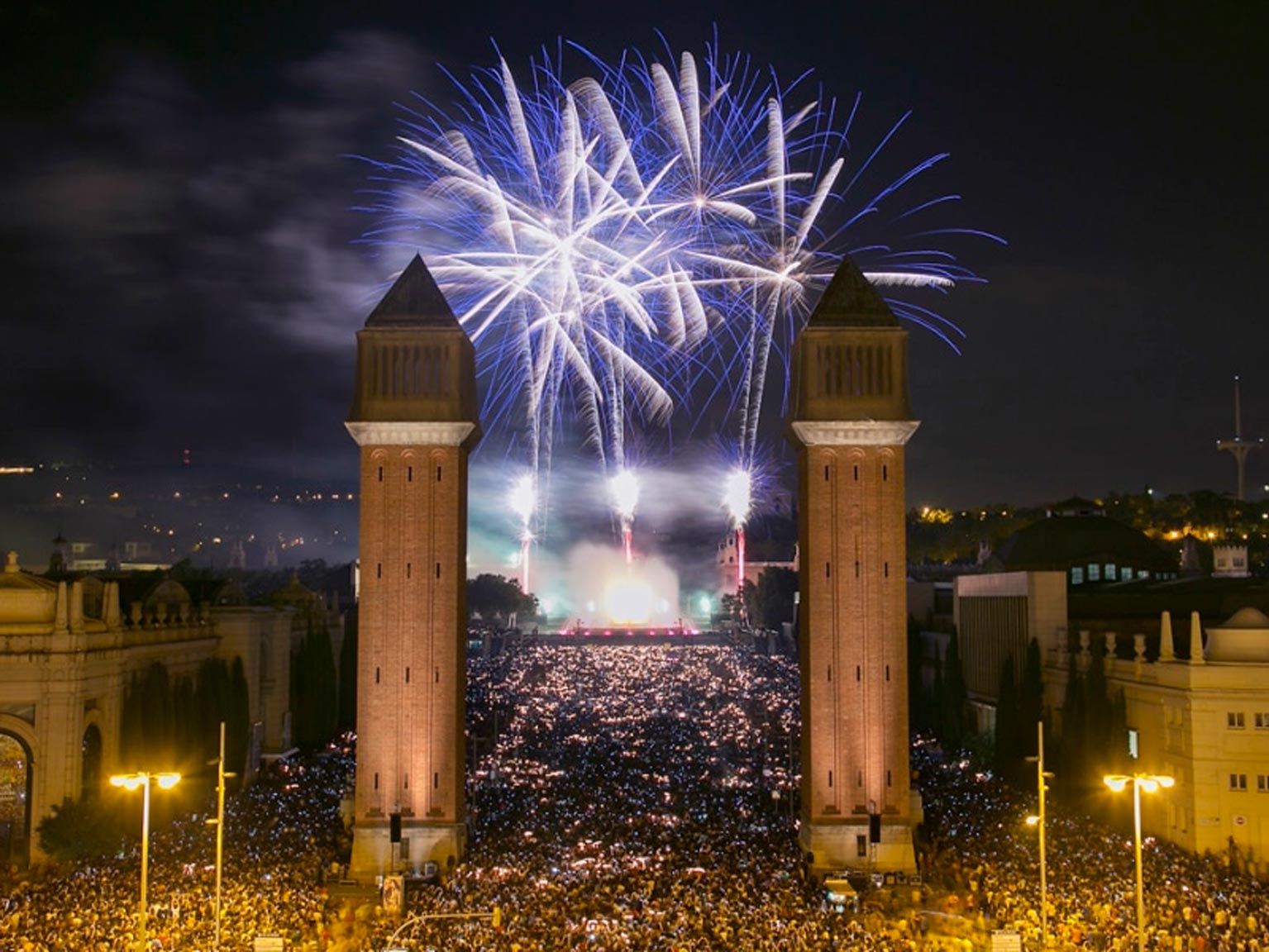 Creativity is the engine of La Mercè. A party that focuses on quality artists, multiple styles and disciplines, with proposals that take place in public and outdoor spaces. This major party wants to be the mirror of a city which is totally open to the world, traditional and at the same time cosmopolitan, renewing its character from contemporary elements that contribute to bringing folklore of our people to all citizens of the current Barcelona. La Mercè intends to be a meeting point for cultures, origins and traditions, a diversity that has been consolidating and that now shapes the society of the city. These festivities are a golden opportunity to live a lively Barcelona so Atipika invites you to enjoy it. Happy festival, Barcelona!

Atipika has an extensive experience managing both straightforward and complex real estate rental transactions. Atipika’s successful path in the real estate market over nearly 20 years makes it possible to offer a broad and attractive range of properties for sale and for rent in Barcelona, with a concise up-to-date information. Do not hesitate to browse our website to find out other properties: https://atipika.com/en/. You can contact us through our live chat, send an e-mail to info@atipika.com or call 93-4575032.

The priviledge of living in the upper area of Barcelona

Atipika invites you to live through Christmas in Barcelona