What was once the old industrial district of Barcelona has become the most modern, artistic and creative district of the city. The airs and graces of the town, the factories and industries of the so-called ‘Manchester of Catalonia’, gradually moved to the outskirts to make way for high rise office buildings, startups, modern lofts, apartments, and much more. However, it was with the impact of the development of the Olympic Village with the 1992 Olympics, and the 22@ District project, that this attractive district became what it is today: one of the most exclusive neighbourhoods in Barcelona.

Located in the eastern area of the city, El Poblenou combines industrial tradition with modern and contemporary life, with many office buildings, design schools, technology companies, hotels and residential areas that are just a few steps away from an infinite number of spaces to visit. Bordered to the north by the Diagonal avenue, and located between ‘Glòries’ area and the beach, El Poblenou is endowed with many modernist examples, so that that it even has its own promenade, ‘La Rambla del Poblenou’, the true heart of the neighborhood. In this post we want to offer you a selection of properties located in the area, as well as draw up a small guide of places to visit in the fashionable district of the city. 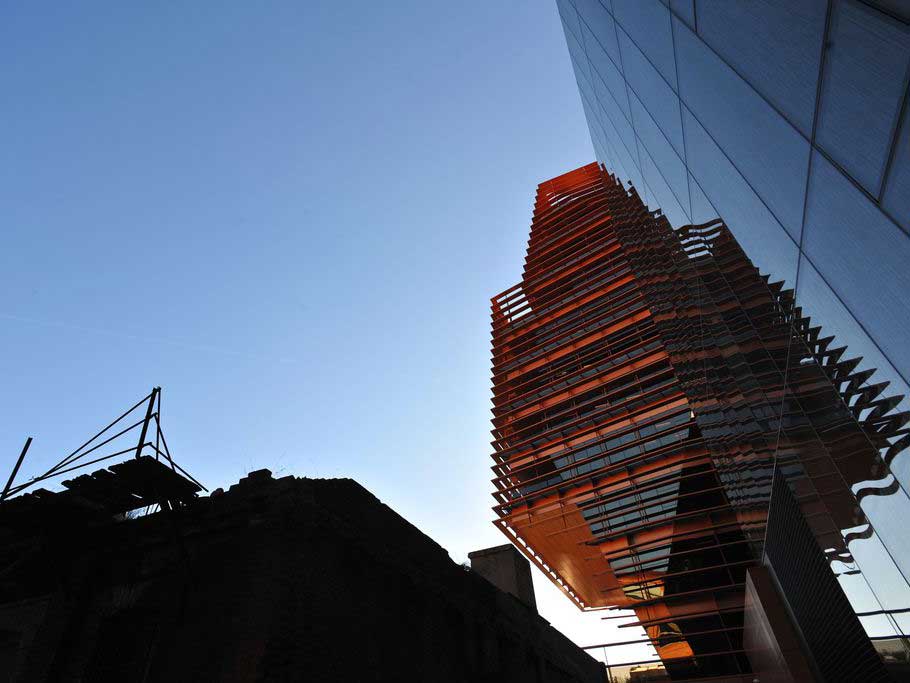 The tour usually starts at the edge of the Glòries district, ‘Plaça de les Glòries’, where we will find the fabulous ‘Disseny Hub‘, an innovative and design municipal facility dedicated to promoting knowledge, creativity and development. With its impressive and sustainable architecture, the Hub is the main entrance to the Poblenou district, the 22@ district, and a key piece in the configuration of the city’s most tech district. And this stop includes one of the must go‘s of this route, the Agbar Tower, or Glòries Tower, Barcelona’s most famous skyscraper.

As following Diagonal to the left, and walking just a few blocks, you will come across the ‘Rambla del Poblenou’, an avenue that has nothing to envy of Barcelona’s main Rambla, as it has a big number of shops, boutiques and restaurants. It is a pedestrian area, so taking a walk along the avenue is a delight. We will advance along it, and going down until we reach Ramon Turró street, where, when we turn left, we will find the old Saladrigas factory, one of the most important factories in the industrial era of the neighbourhood and which still has its large central chimney.

Following the route, we will find Palo Alto Market, the most trendy market in Barcelona, which owes its name to the technological town in California. Located in the former factory of Ramón Gal and Juan Puigsech, this market has many stops of vintage clothing, crafts, street food, DJs and bands. A cultural and creative space that should not be missed if you want to know what’s going on in the capital. Check out their timetables, programmes and much more by clicking on the link: http://es.paloalto.barcelona/. And, El Poblenou offers many more places where creativity can be awakened, such as La Plataforma BCN, Espacio 88, la Sala Beckett, and many others.

The Torre de les Aigües del Besòs is one of the least known places in the urban district of Poblenou. You can get inside thanks to its guided tours, and there, you will discover details of Modernism you have never seen before. You will be able to access the machine room, as well as unravel the dark secrets it holds. The best part of it? The highest part of the tower which, at the end of some charming spiral stairs, will lead you to one of the most unknown viewpoints in Barcelona… After that, and before reaching the beach, an essential stop is the Poblenou Cemetery, a place that will show you that a place as gloomy as a cemetery can also be full of art. It is a funeral museum, full of sculptures, details and charming corners which area characteristic of Novecentism art. The cemetery was extended during the first half of the 19th century, so that today we find two different areas, the original and the modern one. One of the most famous sculptures of the place is ‘Petó de la Mort’, by Jaume Barba; it will not leave you indifferent. 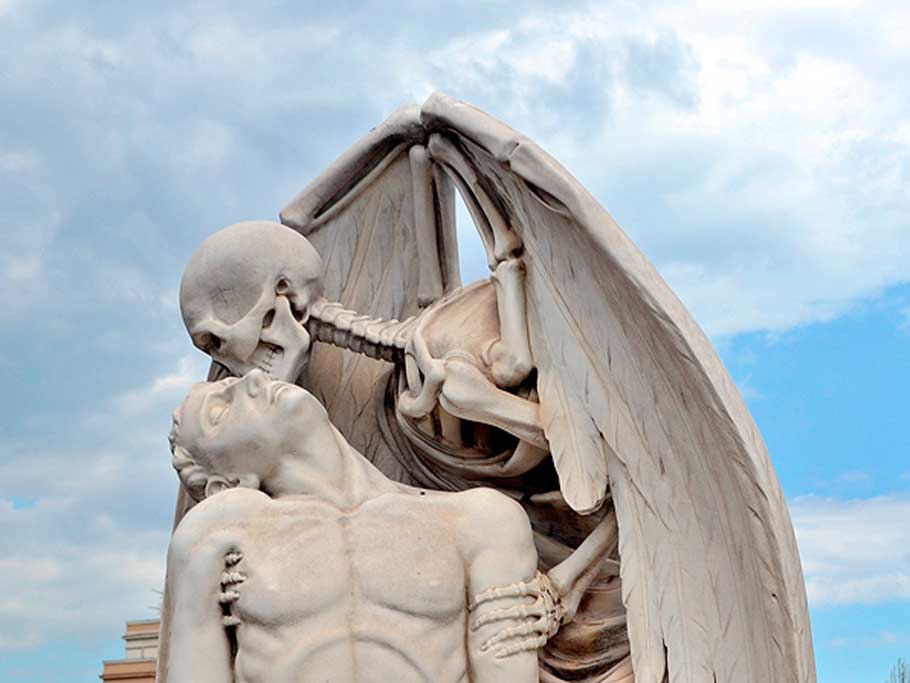 We end our tour at Nova Icària Beach, one of the most peaceful beaches on the coast of Barcelona that is usually frequented by families and couples. It is one of the city’s beaches with the greatest diversity of facilities for activities; it has sports facilities, playgrounds and an area for the disabled. It is the beach next to the Olympic Port and in its background there is the well-known Frank Gehry’s metal fish and the tall buildings of Poblenou. It is an oasis in the centre of the city’s coastline.

ATIPIKA Lifestyle Properties counts with many offers in El Poblenou, both for sale and for rent. The first is this exclusive property with a large terrace and panoramic views of Barcelona and the sea. The outdoors of this property is its great attraction: a large 30sq m terrace with views and a fantastic communal area with a swimming pool, children’s playground, sports facilities, meeting rooms, and much more. The purchase price includes two covered parking spaces on the same property. The incredible luxury furniture, the high quality finishes and the location make this property a must. 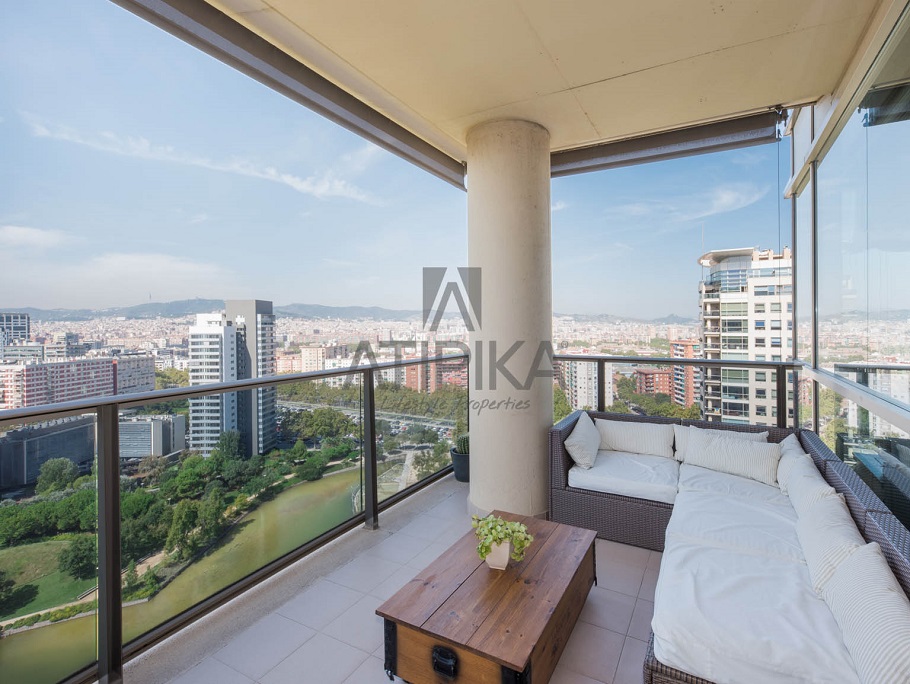 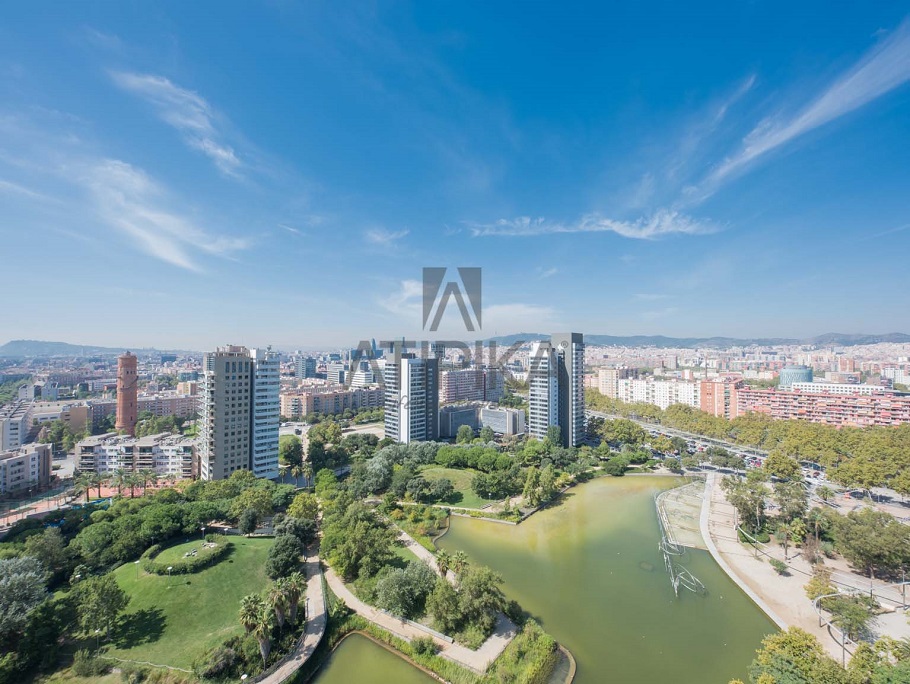 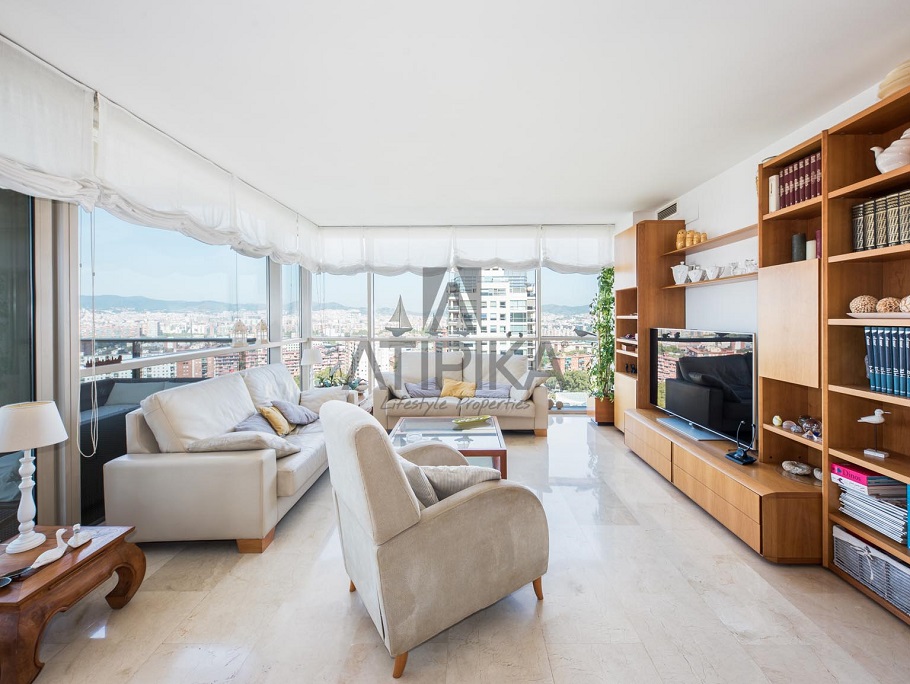 Another one of the most valuable opportunities that Atipika offers is this wonderful totally refurbished apartment with tourist license just a few meters from La Meridiana, Marina street and a short walk from the Nova Icària beach, in a very well-communicated and quiet area. The property has been completely refurbished and it has the best quality materials to guarantee an unbeatable finish. It is a very cosy house, with a 45sq m area and 2 bedrooms, perfect for those who want to enjoy the privileged environment of Poblenou from a small scale. 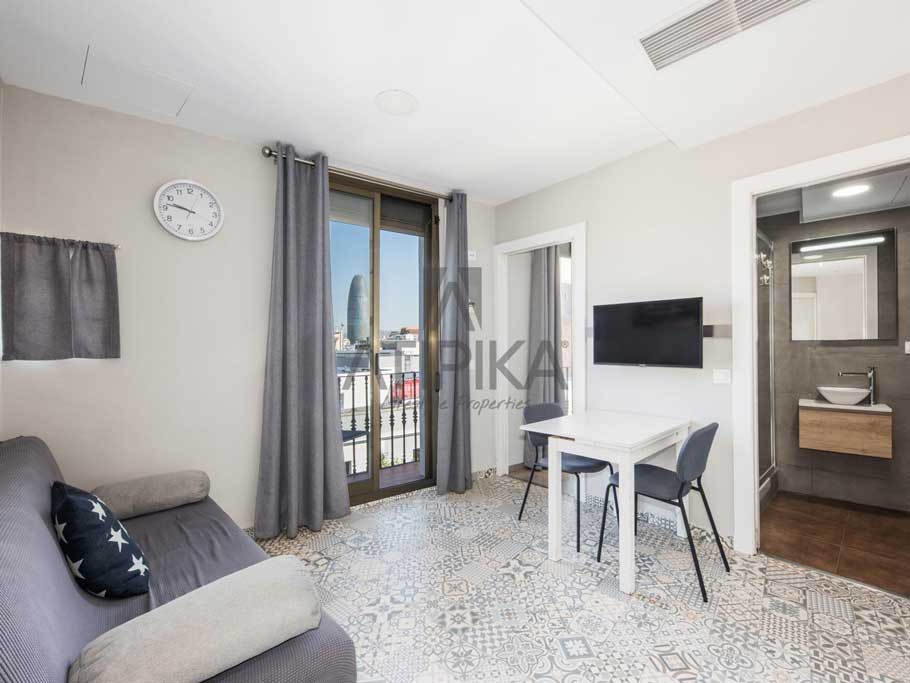 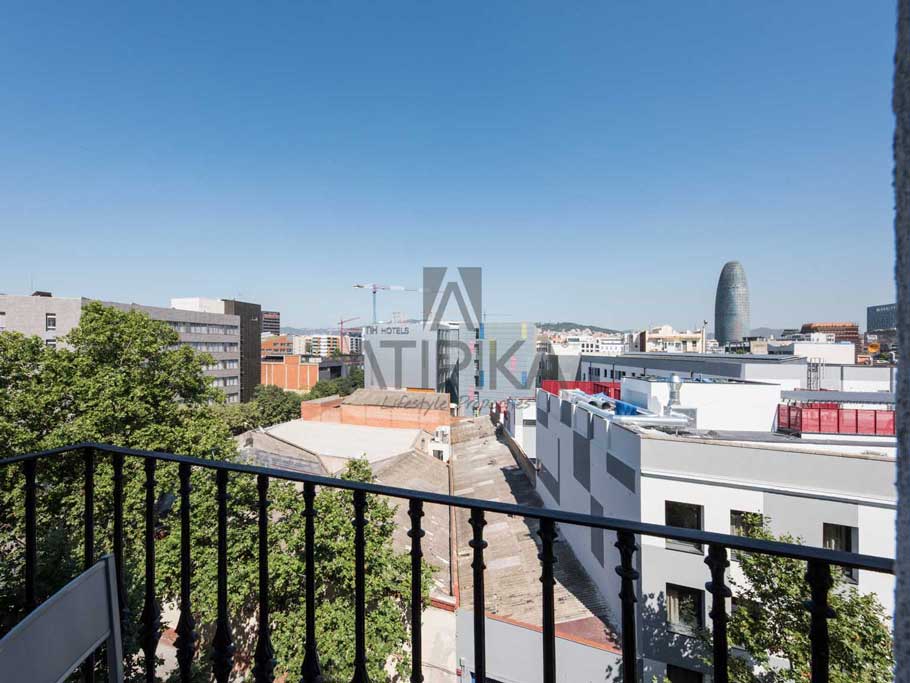 There are options for every type of buyer. This exceptional triplex townhouse with three terraces is a safe bet for those who are looking for the maximum comfort and style, with the peace of mind that comes when living in a townhouse. The property is totally brand new. Built in 2019, it offers a 150sq m area of living space, a garage, 3 bedrooms and a total of 3 terraces, which add up to more than 100sq m, something that has no price when enjoying the good weather in Barcelona. Thanks to its open plan design, this living offers endless layout possibilities and interior design, so don’t hesitate to visit it! 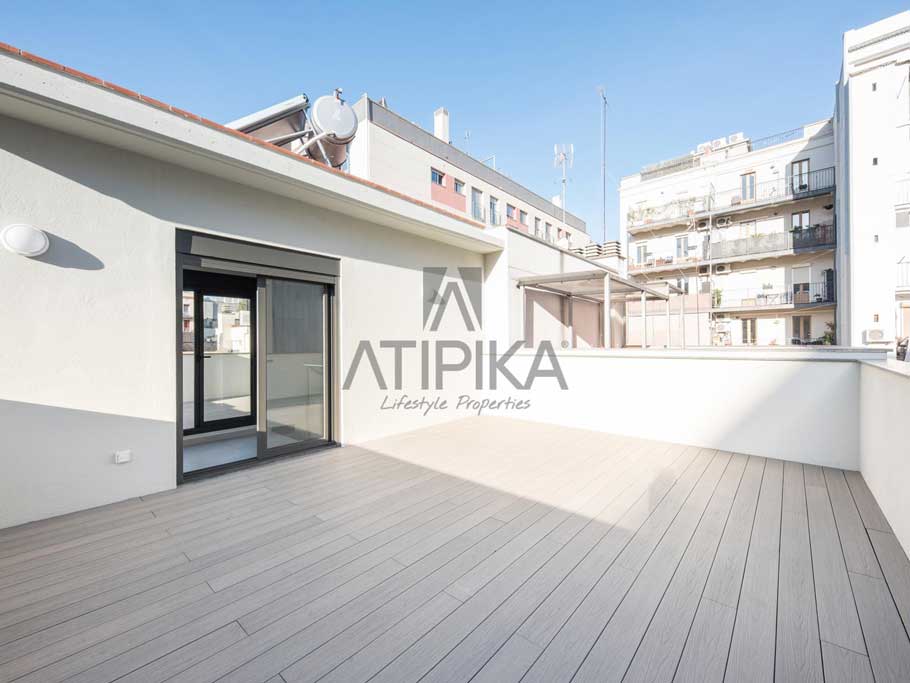 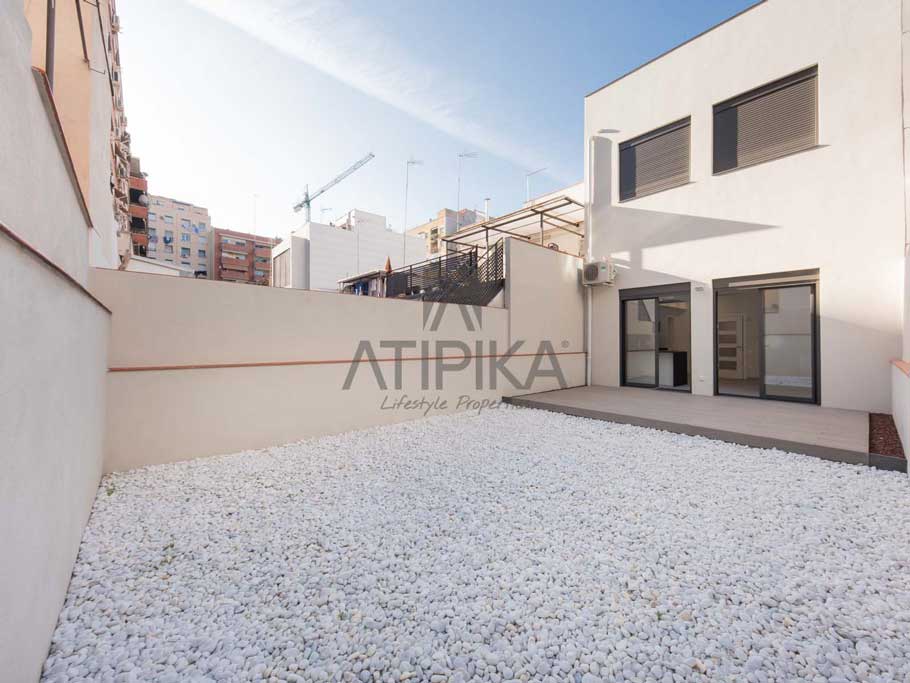 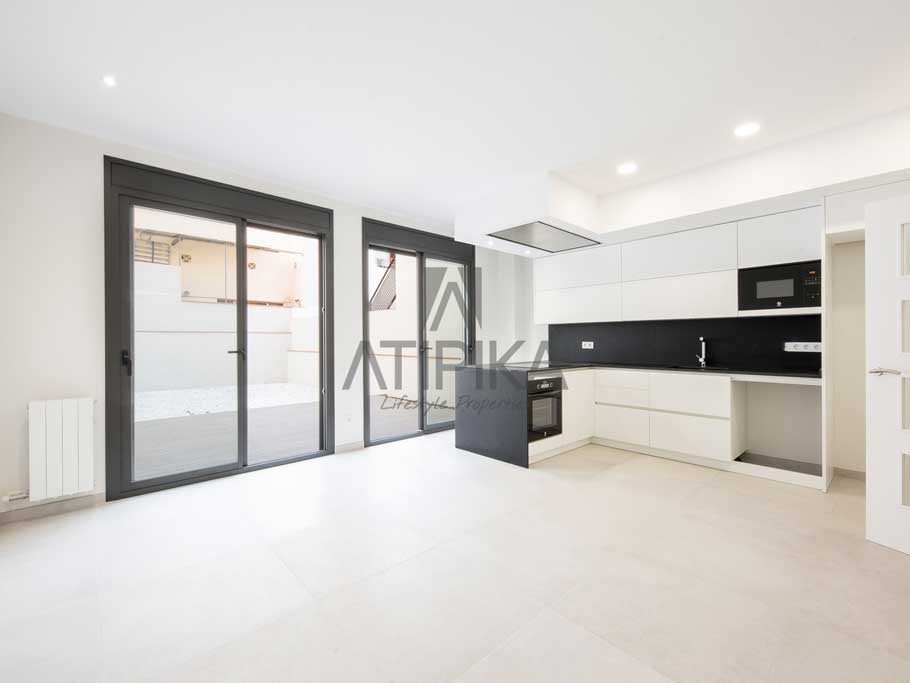 Visit our website to find out about all the properties we offer in the Poblenou district. ATIPIKA’s successful path in the real estate market over nearly 20 years makes it possible to offer a broad and attractive range of properties for sale and for rent in Barcelona, with a concise up-to-date information. Do not hesitate to browse our website to find out other properties: https://atipika.com/en/. You can contact us through our live chat, send an e-mail to info@atipika.com or call 93-4575032.

Living on the outskirts of Barcelona; an interesting option

Atipika invites you to live through Christmas in Barcelona