The luxury sector and Atipika bet for Barcelona

The luxury market in Spain grew a 9.7 percent in sales with an average income close to 600 million euros. According to the ‘Global Powers of Luxury Goods 2017‘ study, this result is surpassed only by France, the country that occupies the first place with a growth of 14.9 percent in sales. Regarding the real estate sector, the trend is the same: investment in luxury properties has grown by more than 30 percent. However, this growth has been reflected not only in purchase and sale, but also in the luxury rental, where there has been an increase of 60 percent compared to 2016.

2017 has been the fourth consecutive year of growth of the real estate sector in Spain, both in prices and in the number of operations. The reasons are mainly due to the good evolution of employment, the improvement of consumer trust, minimum interest rates and investor interest.

The profile of investors corresponds to upper class people of Spanish and foreign origin. Concerning luxury property tenants, most often they are entrepreneurs or company managers that move from other provinces, foreigners who settle in Spain or high-class people.

The flow of the Catalan market experienced a growth of 20 percent, but after the political crisis it has decreased. Despite this, Chinese market has increased its investment in Barcelona around 18 percent since October, imposing thus itself on the Russian market, which until then was the leader.

The Spanish Luxury Association assures that Barcelona is the preferred city for the purchase of high-end goods. The Catalan capital is in the lead with 32 percent of the luxury market, followed by Marbella with 26 percent, Madrid by 17 percent, and, finally, the Balearics Islands with 15 percent.

‘Passeig de Gràcia’ and its equivalents in the world

The most outstanding avenue of Barcelona is ‘Passeig de Gràcia’, the prestige of this street leads to luxury brands and hotels to settle in their regal buildings. A virtue for those who decide to live on the most expensive avenue in Barcelona. 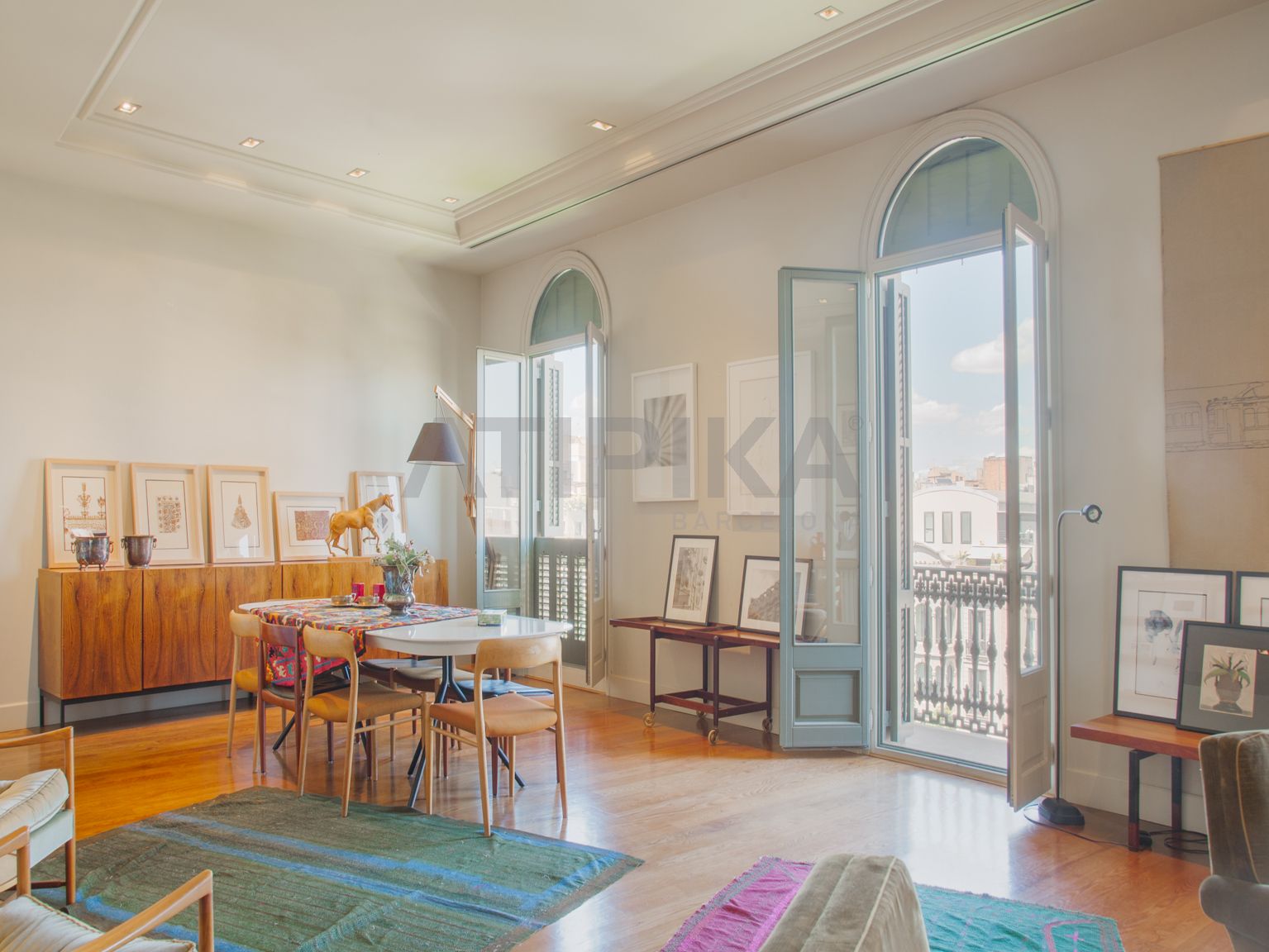 It is here where great brands meet, the street of Barcelona that houses more luxury stores, concentrating a large part of the sales of this sector in Spain. A great national and international showcase that connects ‘Plaça Catalunya’ and ‘Vila de Gràcia’.

‘Passeig de Gràcia’ was the determining factor in the establishment of the Idelfons Cerdà project for Barcelona, ​​a process that created the current ‘Barcelona Eixample’ and lasted three decades of the 19th century. Its design was inspired by French boulevards, coming to resemble the ‘Avenue des Champs-Élysées’. Entered the 20th century, between 1900-1914, it was consolidated as the main bourgeois residential centre, a new artery of Barcelona where the Catalan bourgeoisie built their homes. In this way, the existing constructions were dignified and new buildings with very singular forms were designed. ‘Passeig de Gràcia’ becomes an authentic open-air museum with the modernist and Catalan ‘noucentisme’ buildings, works of art by Gaudí such as ‘La Pedrera’ or ‘La Casa Batlló’, by Puig i Cadafalch as ‘La Casa Ametller’ and by Doménech i Muntaner like ‘La Casa Lleó Morera’. More examples are the organic pavement designed by Gaudí and the famous ‘trencadís’ bench-lamps designed by Pere Falqués and distributed throughout the walk.

Throughout the world we can find different avenues that resemble ‘Passeig de Gràcia’, some have Roman reminiscences like Oxford Street, some are icons of the seventh art like the 5th Avenue and some have a fisherman origin like Causeway Bay. But all of them are the most important commercial axes of their cities.

If there is any famous street in New York it is The 5th Avenue, which in addition to its popularity is one of the main arteries of the city as it connects the north and south of Manhattan. Its buildings house luxury apartments and historic mansions, in fact, this avenue is a symbol of the economic splendour of New York.

The 5th Avenue was mostly residential, as it was the stage where the social elite and the aristocratic families of New York stayed. In the 20th century, the avenue began to transform itself into an exclusive shopping district that attracted the most important brands. This new facet of the 5th Avenue attracts the wealthy class and families of high society begin to settle between the 59th and the 96th Street.

As a result, in the 20s, renowned architects such as Rosario Candela and J.E.R. Carpenter begin to build flats on this avenue. Buildings that share location with very famous places such as the Guggenheim Museum, the Empire State Building or the Metropolitan Museum of Art. 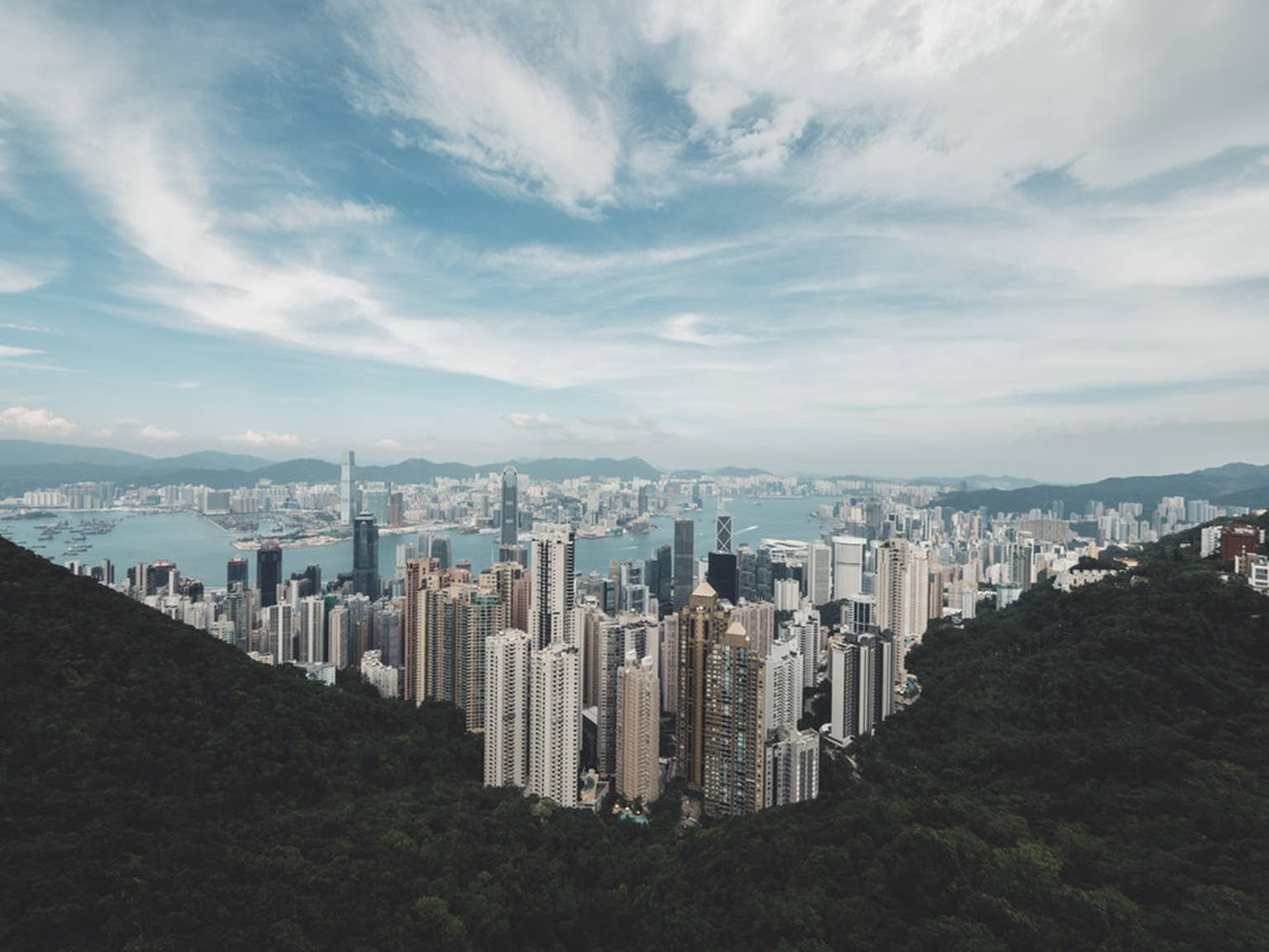 Causeway Bay is a very urbanized part of Hong Kong and represents the main commercial area of the city, in fact, strolling through its streets is to enter a labyrinthine walk of branded shops and shopping centres. The prices of this district are the second highest in the world, behind the 5th Avenue.

Its origin is very different from its current aesthetic, since it was a fishermen’s refuge and a very sedimented bay. Then it gained ground towards the sea and began an urban development, becoming what it is today, one of the most important districts of Hong Kong. There are numerous shopping centres such as Times Square or World Trade Center, which curiously have names that refer to the main economic centres of New York. 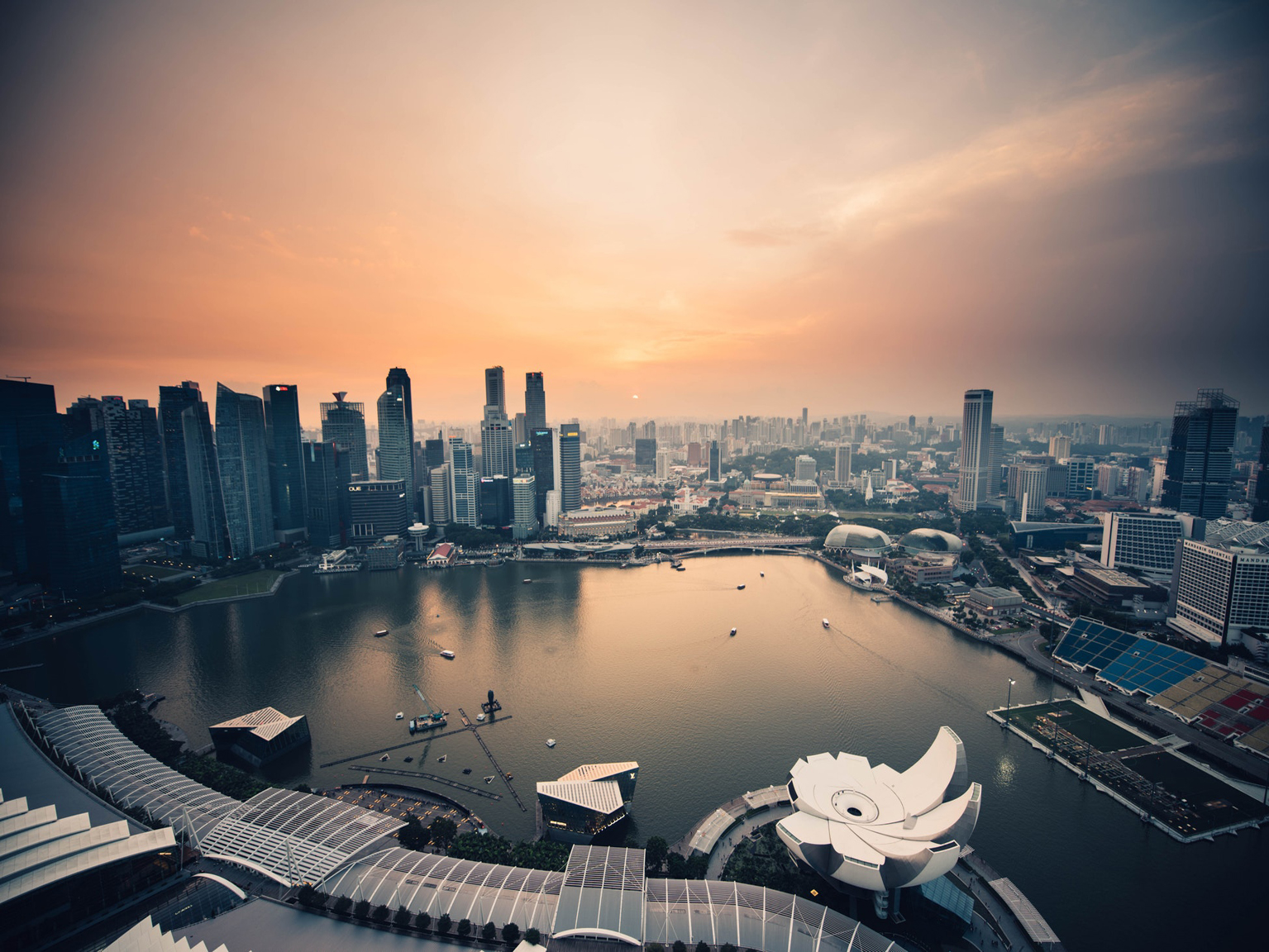 Orchard Road is a tree-lined avenue in Singapore, where you find several shopping centres, the most exclusive hotels and high fashion shops. The street originates in 1830 and was named Orchard Road by an orchid field that was there until the mid-nineteenth century. The flowers gave way to residential buildings, Jewish and Buddhist cemeteries, Hindu temples, food markets and open-air laundries.

It was not until the seventies that this street became what it is today, Singapore’s leisure and commercial centre. In fact, it is in this decade where the most important shopping centre appears, Plaza Singapura. At this moment, the street has 5,000 establishments, divided into fashion boutiques, restaurants and places of leisure above others. 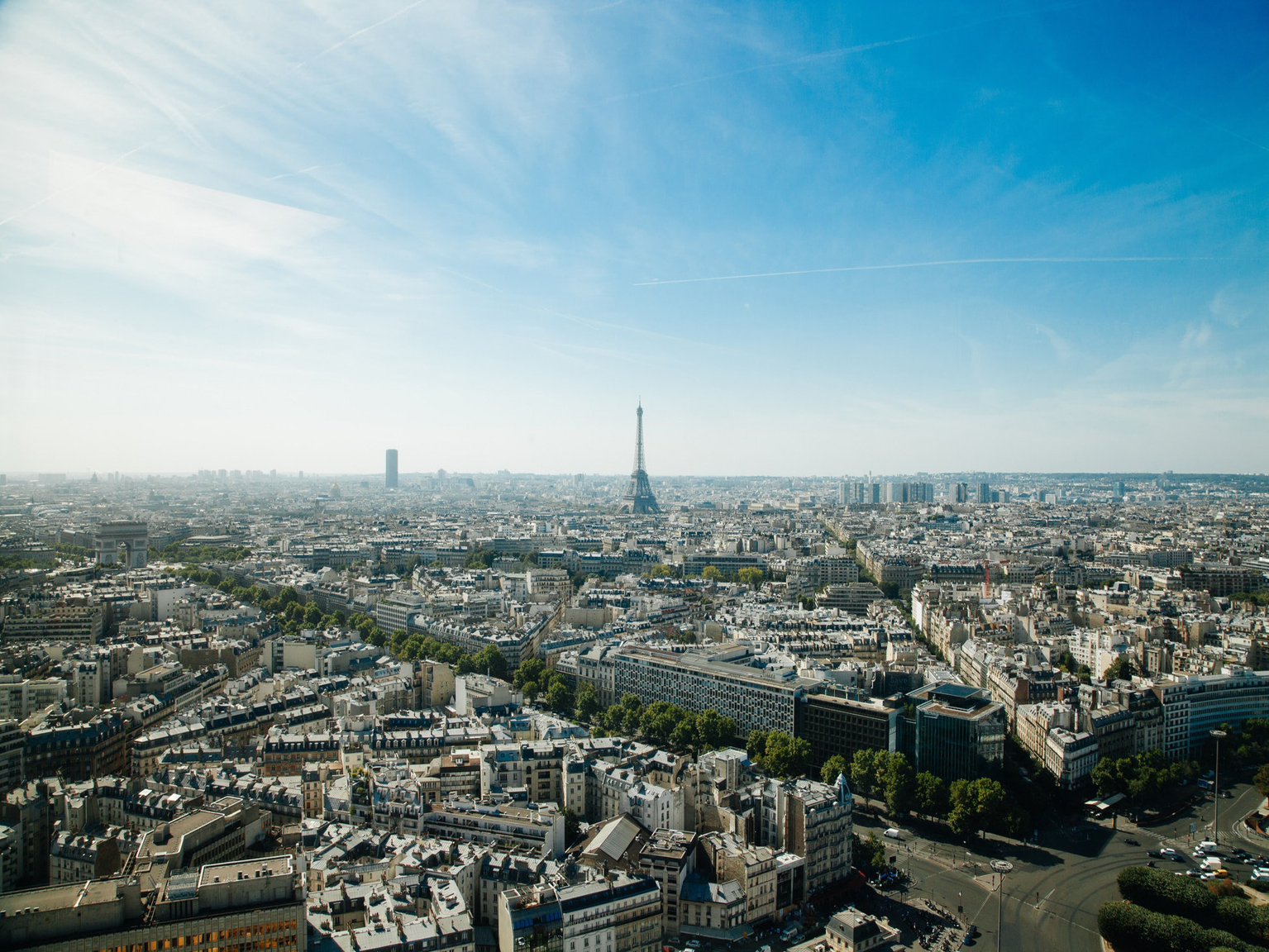 The ‘Avenue Montaigne’ in Paris is one of the most renowned French streets for its many high fashion boutiques and other luxury establishments such as the ‘Plaza Athénée’ hotel. Since the 1980s it is the great ‘damme’, due to several designers that settled there, especially the group LVMH (Möet Hennessey Louis Vuitton). This group attracted investment and international attention to the avenue, to such an extent that main designers, such as Céline, Loewe or Vuitton, among others, have nowadays an important portfolio of buildings in this street.

Originally, in the 18th century, it was called ‘Allée des Veuves’ (Widows’ Alley) because the women in mourning met there. Its current name is in honour of the Renaissance writer Michael de Montaigne.

‘Avenue de Montaigne’ is in District VII and connects directly with the majestic ‘Avenue des Champs-Élysées’. 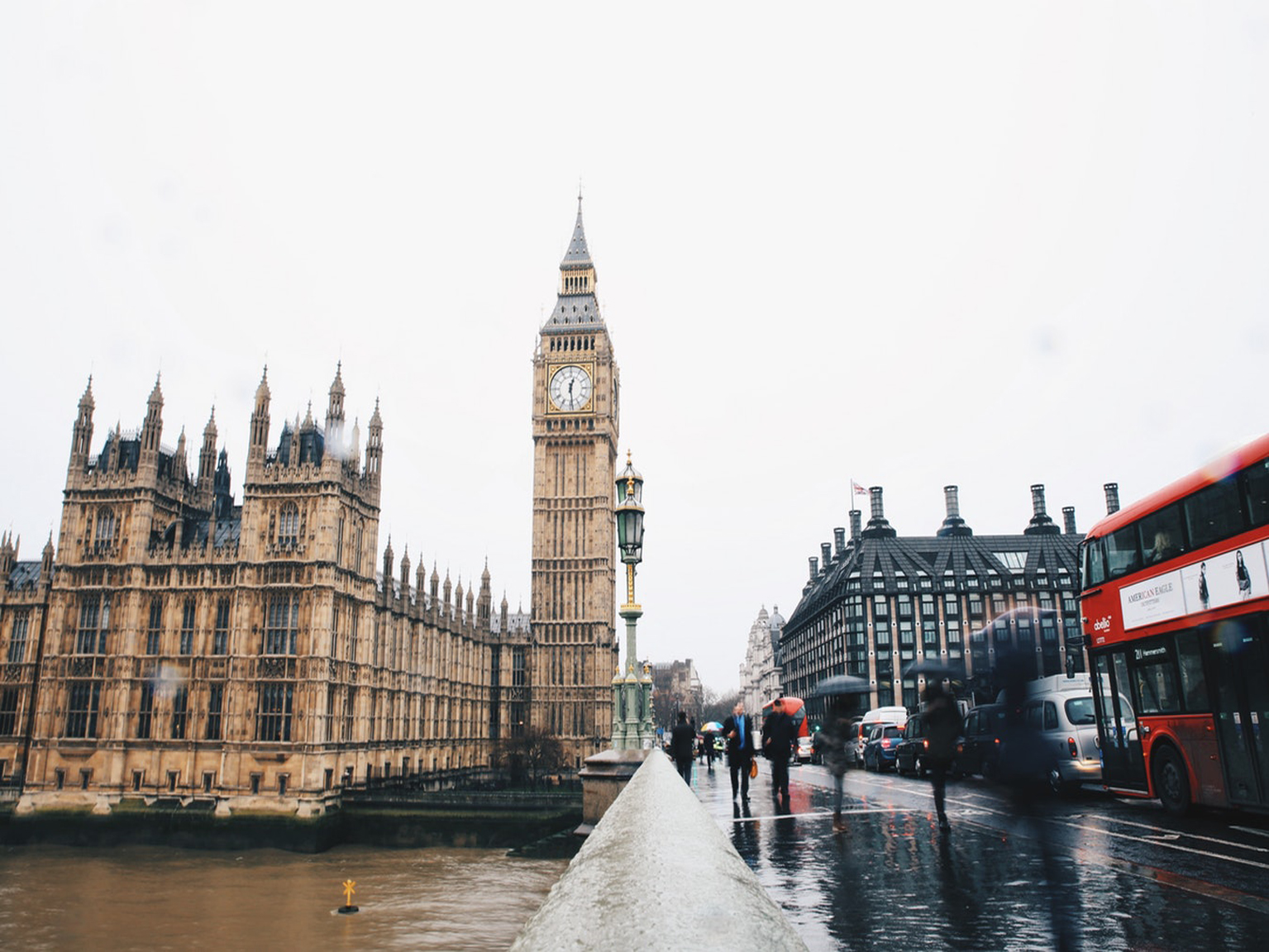 Oxford Street is one of the most emblematic streets of London and one of the most famous commercial avenues in the world, always crowded with its more than 300 stores and its two and a half kilometres length. It has insertions with other famous London streets such as Park Lane, New Bond Street or the luxurious Regent Street.

This street follows the Roman road that united Hampshire with Colchester, which was the main route to enter and leave the city. In the 16th century it became popular because it was the path followed by the convicts from the Newgate prison to the Tyburn gallows, where today Marble Arch is located. Shops began to settle in the 19th century. During the Second World War the street suffered several airplanes attacks that damaged and destroyed many of its buildings, including some of the large shopping centres. One of the most characteristic traditions of Oxford Street is its Christmas lighting, every year a celebrity lowers the switch to illuminate the street with the Christmas decoration. 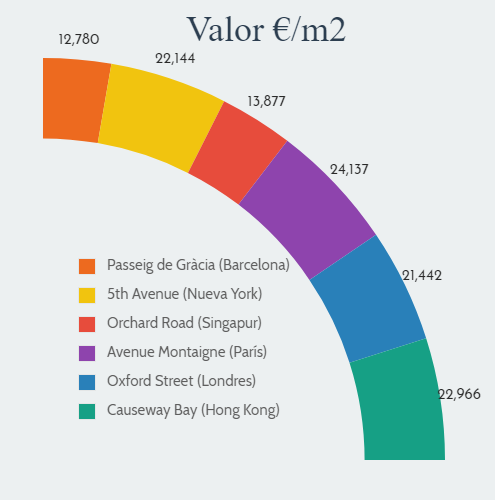 If we compare all these famous avenues with ‘Passeig de Gràcia’, we see that this walk is behind its international equivalents with respect to the value per square meter but, taking into account the increase of the luxury sector in Barcelona, it is expected that the trend of this avenue is going to be a continual increase to its value.

The streets that we have chosen to make the graphic coincide in being the nerve centres of each of their cities, all of them with a large commercial presence of luxury brands. According to the data collected we can see that Orchard Road, the most important area of Singapore, has a similar value to ‘Passeig de Gràcia’, being only 9 percent higher in terms of value per m2. London’s Oxford Street follows with 68 percent higher value. Curiously, the mythical 5th Avenue of New York continues, being 73 percent more expensive than ‘Passeig de Gràcia’. The two avenues that are ahead are Causeway Bay of Hong Kong with a higher value of 80 percent, and the famous ‘Avenue Montaigne’ which has the highest price per m2 of all, on average is 24.137€/sq m, an 89 percent more than ‘Passeig de Gràcia’.

Despite being far from the value per m2 of the Parisian avenue, it is expected an increase of prices of Passeig de Gràcia. In fact, it will not be surprising that the value of the Barcelona promenade increases considerably in the year 2018, following in the footsteps of its European counterparts. All this is due to the fact that real estate prices continue to rise, both in sale and rent, which explains the housing investment in the main cities of the world. In the case of Barcelona, ​​the economic data points out that the growth of the luxury sector is going to be exponential.

Atipika Barcelona has been for more than fifteen years a reference in the luxury real estate sector, which has bet during its trajectory for the value of the emblematic ‘Passeig de Gràcia’, offering numerous properties in this avenue, both for rent and for sale. If you would like to have more information about our properties please contact us through our website, www.atipika.com, or by phone, +34 934815032

Living in the newest neighbourhood of Barcelona